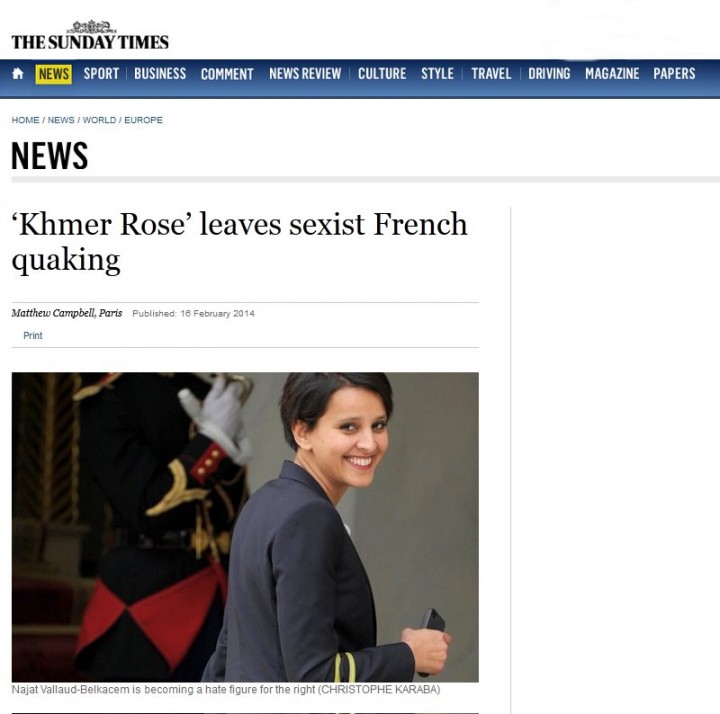 AN ELFIN figure with sparkling eyes and a disarming smile, Najat Vallaud-Belkacem does not look like a dangerous subversive. To French conservatives, though, there is no greater threat to the fabric of society than President François Hollande’s minister of women’s rights.

At 36, she is the youngest member of the Socialist cabinet — and its most controversial. Hervé Mariton, a conservative MP, called the Moroccan-born minister a “smiling Viet Minh”, after the Communist revolutionaries who fought the French in Vietnam.
Le Figaro magazine picked up the theme by labelling her “the Khmer Rose”, whose angelic smile masked a chilling determination to “re-educate” France, challenging gender stereotypes and promoting sexual equality.

Looking more like a student in dark suede shoes and jeans, Vallaud-Belkacem dismisses the critics with a flash of her famous smile. “Everything excessive is insignificant,” she said in an interview in her office. “Le Figaro should stick to what it does best — advising people where to buy champagne and get the best caviar.”

Despite her role as hate figure for the right, a recent opinion poll gave her a 49% approval rating — well above that of the beleaguered Hollande.

While the world has focused on the president’s failure to implement economic reforms, her campaign for equality has attracted less attention, but looks set to revolutionise life for French women.

“It’s the first time in France that we’ve had a law tackling all of the sexual inequalities,” she said.

The broadcasting authority will be obliged to police “sexist” portrayals of women in the media. Panel discussions on TV will have to be gender-balanced. Sports coverage must include more women’s events. Offenders will be subject to warnings and fines. “It’s from the media that we learn the concept of a hierarchy of the sexes,” she said. “To be able to fight that is extremely important for equality.”

Her first act on taking office in 2012 was to bring in a much tougher law against sexual harassment, taking into account all types of abuse, from jokes and innuendo to gestures.

Vallaud-Belkacem was a fervent supporter of the gay marriage law and introduced a bill, yet to be approved by the Senate, that will criminalise male clients of prostitutes.

The “Khmer” epithet relates to what she says is her much-misunderstood “experimental” campaign to teach égalité in primary schools. Under the “ABCD for equality” programme, teachers in 260 primary schools have been given training to stop “reinforcing sexual stereotypes” in the classroom.

“Even the best-intentioned teachers are stricter when a girl misbehaves than when a boy misbehaves, simply because there’s this idea that it’s normal for a boy to misbehave, it’s not very serious; on the other hand for a girl it’s serious,” she explained.

The initiative was reported in France as an example of “gender studies” — a much-maligned Anglo-Saxon import — being taught in the classroom. Already worried about the appearance of children’s books such as Jean a Deux Mamans (Jean Has Two Mummies), some parents removed their children from school. “It really scared parents,” she said.

In reality, she said, the idea is to ensure a more balanced “sexual division of skills and competence”, breaking the mould of boys going into science and girls into literature and the arts.

Her struggle for equality may be rooted in her own experiences — her father was a construction worker — in France’s male-dominated politics. She was once mistaken for the maid when she opened the door to a politician she had invited to dinner.

“Being of foreign origin and, what’s more, a woman, and young, you are constantly having to prove yourself,” she said. That could be why she is in her office from 7.30am to 11pm — not the best example, she admitted, of a healthy work-life balance. “It’s exhausting,” she confided, with another smile. “But it’s exceptional being a minister and that justifies some sacrifices” — referring to the little time she gets to spend with her five-year-old twins.

“What matters to me,” she added, before being swept away in a chauffeur-driven limousine to meet the prime minister, “is that my combat serves some purpose. To feel that I’ve brought progress.”