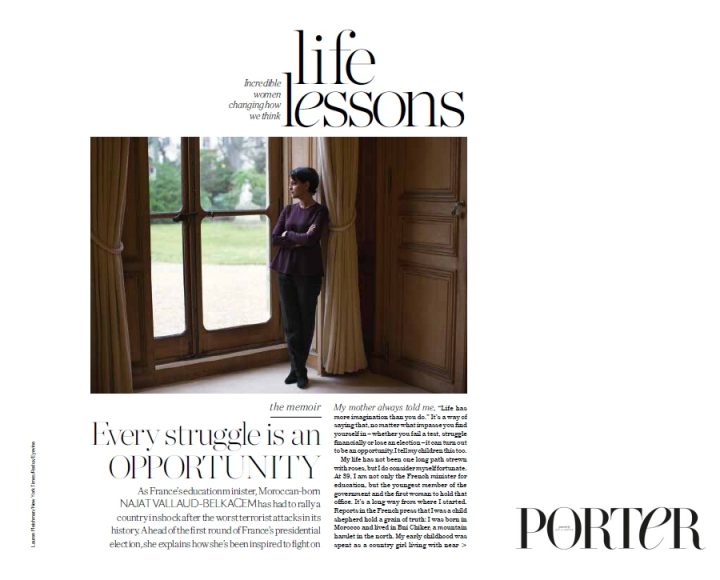 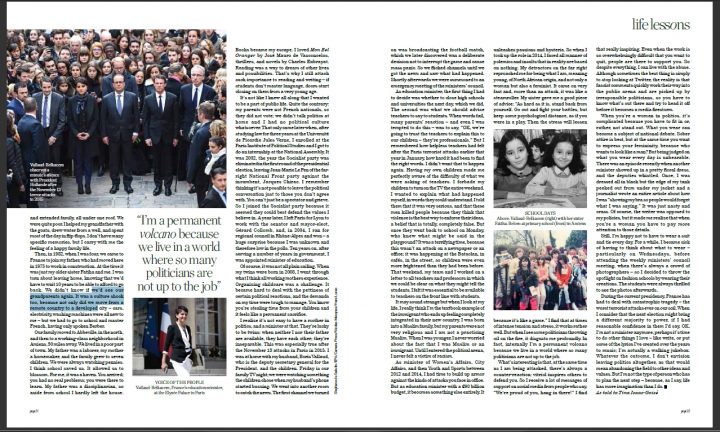 As France’s education minister, Moroccan-born Najat Vallaud-Belkacem has had to rally a country in shock after the worst terrorist attacks in its history. Ahead of the first round of France’s presidential election, she explains how she’s been inspired to fight on.

My mother always told me, “Life has more imagination than you do.” It’s a way of saying that, no matter what impasse you find yourself in – whether you fail a test, struggle financially or lose an election – it can turn out to be an opportunity. I tell my children this too. My life has not been one long path strewn with roses, but I do consider myself fortunate. At 39, I am not only the French minister for education, but the youngest member of the government and the first woman to hold that office. It’s a long way from where I started.
Reports in the French press that I was a child shepherd hold a grain of truth: I was born in Morocco and lived in Bni Chiker, a mountain hamlet in the north. My early childhood was spent as a country girl living with near and extended family, all under one roof. We were quite poor. I helped my grandfather with the goats, drew water from a well, and spent most of the day in flip-flops. I don’t have many specific memories, but I carry with me the feeling of a happy family life.
Then, in 1982, when I was four, we came to France to join my father, who had moved here in 1975 to work in construction. At the time it was just my older sister Fatiha and me. I was torn about leaving home, knowing that we’d have to wait 10 years to be able to afford to go
back. We didn’t know if we’d see our grandparents again. It was a culture shock too, because not only did we move from a remote country to a developed city – cars, electricity, washing machines were all new to me – but we had to go to school and master French, having only spoken Berber.
Our family moved to Abbeville, in the north, and then to a working-class neighborhood in Amiens, 30 miles away. We lived in a poor part of town. My father was a laborer, my mother a homemaker, and the family grew to seven children. We were always watching pennies.
I think school saved us. It allowed us to blossom. For me, it was a haven. You arrived; you had no real problems; you were there to learn. My father was a disciplinarian, so aside from school I hardly left the house.

Books became my escape. I loved Mon Bel Oranger by José Mauro de Vasconcelos, thrillers, and novels by Charles Exbrayat. Reading was a way to dream of other lives and possibilities. That’s why I still attach such importance to reading and writing – if students don’t master language, doors start closing on them from a very young age.
It’s not like I knew all along that I wanted to be a part of public life. Quite the contrary: my parents were not French nationals, so they did not vote; we didn’t talk politics at home and I had no political culture whatsoever. That only came later when, after studying law for three years at the Université de Picardie Jules Verne, I enrolled at the Paris Institute of Political Studies and I got to do an internship at the National Assembly. It was 2002, the year the Socialist party was eliminated in the first round of the presidential election, leaving Jean-Marie Le Pen of the farright National Front party against the incumbent, Jacques Chirac. I remember thinking it’s not possible to leave the political conversation just to those you don’t agree with. You can’t just be a spectator and grieve.
So I joined the Socialist party because it seemed they could best defend the values I believe in. A year later, I left Paris for Lyon to work with the senator and mayor-elect, Gérard Collomb, and, in 2004, I ran for regional council in Rhône-Alpes and won – a huge surprise because I was unknown and therefore low in the polls. Ten years on, after serving a number of years in government, I was appointed minister of education.

Of course, it was not all plain sailing. When my twins were born in 2008, I went through what I think all working mothers experience. Organizing childcare was a challenge. It became hard to deal with the pettiness of certain political reactions, and the demands on my time were tough to manage. You know you’re stealing time from your children and it feels like a permanent sacrifice. I realize it’s not easy to have a mother in politics, and a minister at that. They’re lucky to be twins: when neither I nor their father are available, they have each other; they’re inseparable. This was especially true after the November 13 attacks in Paris in 2015. I was at home with my husband, Boris Vallaud, who is the deputy secretary general for the President, and the children. Friday is our family TV night; we were watching something the children chose when my husband’s phone started buzzing. We went into another room to catch the news. The first channel we turned on was broadcasting the football match, which we later discovered was a deliberate decision not to interrupt the game and cause mass panic. So we flicked channels until we got the news and saw what had happened.
Shortly afterwards we were summoned to an emergency meeting of the ministers’ council.

As education minister, the first thing I had to decide was whether to close high schools and universities the next day, which we did. The second was what we should advise teachers to say to students. When words fail, many parents’ reaction – and even I was tempted to do this – was to say, “OK, we’re going to trust the teachers to explain this to our children – they’re professionals.” But I remembered how helpless teachers had felt after the Paris terrorist attacks earlier that year in January, how hard it had been to find the right words. I didn’t want that to happen again. Having my own children made me perfectly aware of the difficulty of what we were asking of teachers. I forbade my children to turn on the TV the entire weekend. I wanted to explain what had happened myself, in words they could understand. I told them that it was very serious, and that these men killed people because they think that violence is the best way to enforce their ideas, a belief that is totally, completely false. But once they went back to school on Monday, who knew what might be said in the playground? It was a terrifying time, because this wasn’t an attack on a newspaper or an office; it was happening at the Bataclan, in cafés, in the street, so children were even more frightened than they had been before.
That weekend, my team and I worked on a letter to all teachers and professors in which we could be clear on what they might tell the students. I felt it was essential to be available to teachers on the front line with students.

It may sound strange but when I look at my life, I really think I’m the textbook example of the immigrant who ends up feeling completely integrated in their new country. I was born into a Muslim family, but my parents were not very religious and I am not a practicing Muslim. When I was younger, I never worried about the fact that I was Muslim or an immigrant. Until I entered the political arena, I never felt a victim of racism.

As minister of Women’s Affairs, City Affairs, and then Youth and Sports between 2012 and 2014, I had time to build up armor against the kinds of attacks you face in office. But as education minister with a €90 billion budget, it becomes something else entirely. It because it’s like a game.” I find that at times of intense tension and stress, it works rather well. But when I see some politicians throwing oil on the fire, it disgusts me profoundly. In fact, internally I’m a permanent volcano because we live in a world where so many politicians are not up to the job.

What’s interesting is that, at the same time as I am being attacked, there’s always a
counter-reaction: vitriol inspires others to defend you. So I receive a lot of messages of
support on social media from people who say, “We’re proud of you, hang in there!” I find that really inspiring. Even when the work is so overwhelmingly difficult that you want to quit, people are there to support you. So despite everything, I can live with the abuse.
Although sometimes the best thing is simply to stop looking at Twitter, the reality is that fascist comments quickly work their way into the public arena and are picked up by irresponsible politicians, so you have to know what’s out there and try to head it off before it becomes a media firestorm.

When you’re a woman in politics, it’s complicated because you have to fit in or, rather, not stand out. What you wear can become a subject of national debate. Sober attire is best, but at the same time you want to express your femininity, because who wants to look like a man? But being judged on what you wear every day is unbearable.
There was an episode recently when another minister showed up in a pretty floral dress,
and the deputies whistled. Once, I was dressed all in black but the edge of my tank peeked out from under my jacket and a journalist wrote an entire article about how I was “showing my bra so people would forget what I was saying.” It was just nasty and crass. Of course, the writer was opposed to my policies, but it made me realize that when you’re a woman you have to pay more attention to those details.

Still, I’m happy not to have to wear a suit and tie every day. For a while, I became sick of having to think about what to wear – particularly on Wednesdays, before attending the weekly ministers’ council meeting, when there’s always a crowd of photographers – so I decided to throw the spotlight on fashion schools by wearing their creations. The students were always thrilled to see the photos afterwards.

During the current presidency, France has had to deal with catastrophic tragedy – the worst terrorist attacks ever on our soil. When I consider that the next election might bring a different majority to power, if I had reasonable confidence in them I’d say, OK, I’m not a minister anymore, perhaps it’s time to do other things I love – like write, or put some of the lyrics I’ve created over the years to music; I’m actually a walking jukebox. Whatever the outcome, I don’t envision leaving politics altogether, as that would mean abandoning the field to other ideas and values. But I’m not the type of person who has to plan the next step – because, as I say, life has more imagination than I do.

As told to Tina Isaac-Goizé for Porter Magazine.